PDU Circuit Breakers and Branch Circuits: Why Monitor Both?

Let’s begin with a simple one-line diagram depicting the electrical flow in a Raritan intelligent rack power distribution unit (iPDU) model PX2-1497. Although it shows a PX2-1497, any power strip that is 208V/1 PH/30A (24A rated), from any manufacturer, of any feature set from a basic PDU to the most high-end PDU, is basically the same -- two circuit breakers (each 20A): 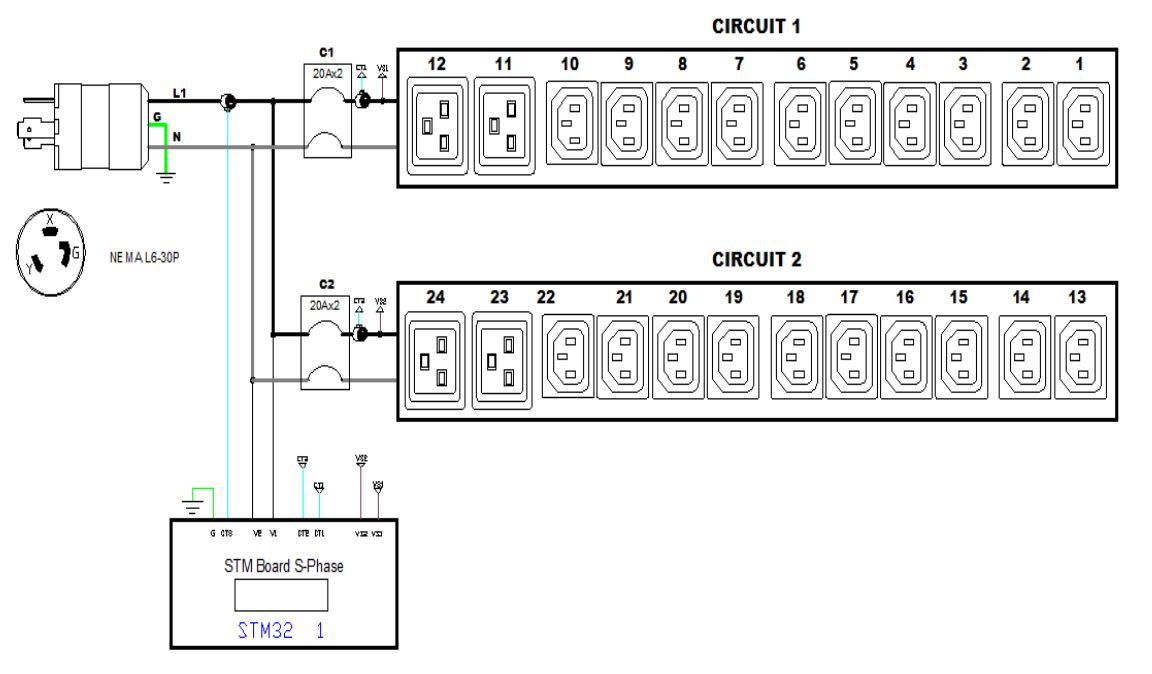 To understand the main reasons to deploy an intelligent rack mount power strip in this environment instead of relying on data from a panelboard branch circuit meter (BCM), one must focus on two areas of this diagram: 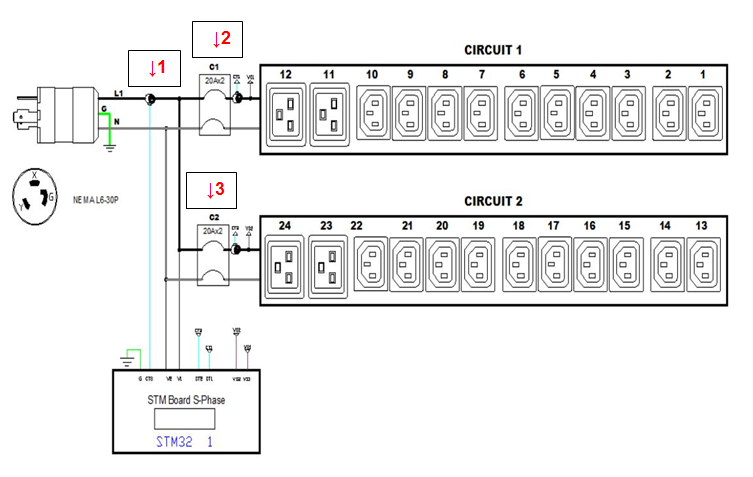 At arrow #1 you find a current transformer on the hot wire reading the energy drawn by the power strip. It is accurate to say that these readings are the same as those found at the panelboard BCM.

Consider two cases where metering at the panelboard but not the circuit breaker could lead you astray:

(1) Server Power Supply Failure - This is the most common cause of a circuit breaker tripping on a rack PDU. When this happens, one branch circuit breaker will trip on the rack PDU.  However, the BCM will have no idea of this failure mode. It will simply register a drop in load -- which could be for any reason including normal server ebbs and flows in power demand. In contrast, if you look at arrows #2 and #3 above, you see that the Raritan Intelligent PDU has a voltage sensor behind each breaker. The PDU will not only detect that the load on the circuit breaker has gone to zero, but also that voltage has dropped to zero, and alert the technicians.

(2) Improper Server Loading - Consider a rack PDU in a Tier IV environment that is "perfectly" loaded (a little less than 50% per line).  In this case, the BCM will read:

In theory, if A-side PDU power is lost, the redundant B-side PDU can handle the failover power draw. But, the lack of detailed information could be hiding a risk.

As you see in the above diagram, hot wire power is distributed to two circuit breakers: C1 and C2.  But, there’s no way of telling how the current is being distributed within the PDU from the BCM.  Consider the following two scenarios:

In the CORRECT case, Tier IV power reliability is maintained: in the event of A-side power failure, the B-side PDU can handle the load (with C1 and C2 going to approximately 15A each).

In the INCORRECT case, you do not really have a Tier IV infrastructure.  In the event of A-side failure, the draw on B-side C1 would go from 11A to 22A and trip the rack PDU breaker. You would then have a cascading power loss in at least that serve and, in many cases, the cabinet, depending on what types of servers are being used.

For clients using blade servers or for clients placing a lot of servers at the bottom of the cabinet, and not physically distributing them throughout the cabinet the INCORRECT loading is very common.  It is easily detected with a Raritan metered PDU, but impossible to detect with only a panelboard BCM.  In addition to the above important monitoring / alerting benefits, consider three more benefits provided by intelligent rack PDUs that a panelboard BCM does not provide:

A. Makes Other Metering at the Cabinet Inexpensive - Environmental sensors such as Temperature, Humidity, Differential Pressure, Air Flow; are relatively expensive to deploy with a typical BMS. But with a rack PDU in each cabinet, they are actually quite inexpensive.

B. Leakage Current Detection (Residual Current Monitoring) - In many jurisdictions, data centers must check each panelboard feed quarterly or annually, for leakage current from neutral-to-ground.  Raritan's PX3-1497 power strip is available with a residual current monitoring feature that automates this task completely, without having to schedule any maintenance windows.

C. Easily Available Data - Many panelboard BCM solutions provide data via SCADA or MODBUS-type protocols -- common to BMS software systems, but difficult to scale to other solutions that might want the data.  Raritan's intelligent PDU provides its data over BMS-friendly MODBUS/TCP, but also over IT-friendly SNMP. And, it naturally integrates with Raritan’s DCIM software.

Want to learn more about Raritan’s PX intelligent rack PDU series? Download this data sheet to get started or speak to a data center power expert.